END_OF_DOCUMENT_TOKEN_TO_BE_REPLACED

The hijab—the veil—is one of the most visual signs of Islam. Many see the scarf and associate it with, well, oppression. Some within the Muslim communities perceive it as a way to determine a Muslim women’s adherence to faith. Amidst all these perceptions, wherever they may come from, are Muslim women who go beyond those discussions and use artistic expression to engage the question of the veil: What does it mean to those who wear it and those who do not?

END_OF_DOCUMENT_TOKEN_TO_BE_REPLACED

A couple of weeks ago, Inside Islam aired a radio show on “The Taqwacores” and we posted a series of blog entries on the punk movement in the US. You can listen to the broadcast and browse all of the posts about Taqwacores on Inside Islam by clicking here.

The following video from NBC Nightly News features our guests from that radio show — author of The Taqwacores Michael Muhammad Knight and drummer for the Kominas Imran Malik. The video highlights other individuals and bands who are also struggling to articulate this new Muslim punk genre of music and what it means to a mainstream audience.

END_OF_DOCUMENT_TOKEN_TO_BE_REPLACED 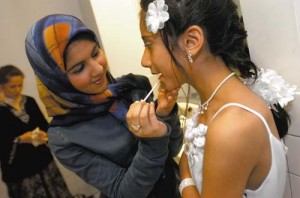 Altmuslimah is a branch of altmuslim, a blog we’ve written about before on Inside Islam that has critical, independent thought on Islam today. Altmuslimah, on the other hand, focuses on the gender divide within Islam and opens up discussion about important issues like the women’s movement for equality in Islam recently launched as The Musawah Movement. Here in this post on Inside Islam, we outlined the emerging debates and global significance of such a movement and invite readers to leave their own thoughts as well.