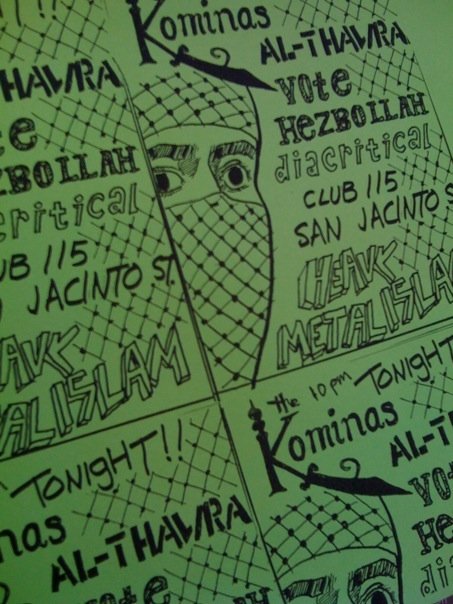 Earlier this year, I wrote a post about punk Islam in response to the LA Times’ “Islam, the Koran, and Lots of Questions.” Michael Muhammad Knight’s book about Muslim youth and the American punk music scene, The Taqwacores, as well as a band called The Kominas were mentioned in the last post. Today, I return to these subjects because The Taqwacores will also be the focus of the next Inside Islam radio show, airing this Thursday.

I recently had a conversation with Imran Malik, a Taqwacore and drummer for The Kominas. The band just played at a major music festival and media conference called South by Southwest (SXSW) and a poster from their tour is posted above.

Imran told me about other Taqwacore bands, too. One was started up by some of the same members of The Kominas and called The Dead Bhuttos. Unfortunately, that band failed to take off because the band members, radio stations, and others backed out for political and cultural reasons in Pakistan. I also found Noble Drew, a band that is just getting started. There are many others, and we welcome you to leave your favorites in the comments section below.

The upcoming documentary on Taqwacore bands and feature movie based on the book will probably raise new questions in addition to those raised by Erika Hayasak in The Los Angeles Times. After talking with Imran, however, I’m not convinced that the answers to those questions have to do with just punk music, Islam, or just concern the personal lives of Muslim fans like Hiba Siddiqui.

On the recently launched Taqwacore’s Webizine, director of the documentary Omar Majeed writes:

Perfect images defining Taqwacore would always remain elusive, sometimes to my chagrin. Taqwacore, the real-life phenomenon, is an abstraction, or blank cheque for trying various personas before settling on one. It is a mediated, meta and mercurial process. It is play time for Muslim music makers and crazed poets. Easier to capture in drama, painting, comic, poem or song … but a bitch to make a documentary about.

In many ways, Taqwacores are beginning a new conversation in America. Not only are Taqwacores unlike other Muslim communities in the US but “punk Islam” has really been absent from online and mainstream news conversations until this year. The Taqwacores movement as well, as Imran told me, is only beginning and being led by the bands not the book. As the movement stands, the reason behind it was best described by the music and a story of “life imitating art.”

If you want to read more from Imran Malik and other Taqwacores as the story develops, they’ve begun posting entries on bands, concerts, and even commentary on Yusuf Islam (formerly known as Cat Stevens). Don’t forget to let them know what you think and why this conversation is important as well in the comments below.

2 thoughts on “The Taqwacores Movement”