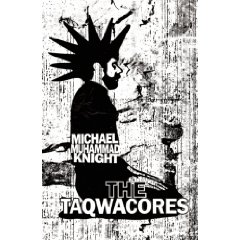 The Taqwacores by Michael Muhammad Knight

Identity and belonging are funny things. They never mean the same thing to everyone. Growing up as a Muslim American, I was exposed to a myriad of experiences, but I definitely cannot say I was exposed to every kind of Muslim or every interpretation of Islam. We are talking about over 1.3 billion people! What I have learned is that there are Muslims everywhere who have grown up claiming more than one identity marker and they are finding numerous ways to think about their faith, question, negotiate, and locate a space within it that they feel as their own.

There are so many ways that this can and has been done. One of the most visible is music. There are many Muslim artists who are using music to engage in this conversation over faith. This music takes many forms: heavy metal, hip hop, and punk rock, to name a few. Artists like Outlandish, for example, have even made it internationally. The focus of the next Inside Islam radio show is a punk rock movement inspired by Michael Muhammad Knight’s book The Taqwacores. Since, I am interested in music and Muslim identity, I thought I would read the book and see what it’s all about.

Well, to put it simply, it’s about a world that is beyond any interpretation of faith with which I have grown up. Reading this book, I found myself, honestly, offended at many points. The references to drinking and praying weren’t the parts that really hit me; it was the way, for example, that the Prophet is spoken about that troubled me and the way a review of the book describes the characters as urinating on the Koran. For me, that reminds me too much of what some critics of Islam and Muslims do, say, and advocate. How many times do I have to hear discussions that suggest that my Prophet was a womanizer and pedophile? That’s why I was so bothered when Knight engages in that discourse in the book.

I am not questioning the author’s religious identity at all, I am simply sharing my reaction to the book as a Muslim as well. I am simply saying that there are many Muslims who truly believe in and adhere to many of the tenets and aspects of the faith and yet question, challenge, and formulate responses to interpretations of Islam that they do not always agree with. What I am really trying to say is that you don’t always have to reject many aspects of a faith to truly engage it; you can still be critical and an adherent — I know that I am.

We at Inside Islam invite you to join the discussion by commenting below and by listening to the show tomorrow at 3 p.m. Central Time. Click here to find out how to listen and participate.