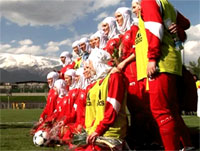 Today on Here on Earth: Radio Without Borders the crew that also produces the Inside Islam radio series will air a related program about the German and Iranian women’s soccer teams at 3 pm Central. The show will focus on the documentary film Football Under Cover. For information on how to listen and to find out about today’s guests co-director David Assmann and producer Marlene Assmann, click here.

Have you already seen Football Under Cover? What did you think? If you haven’t seen the documentary and live here in Wisconsin, it is going to be one of nine films in the Wisconsin Film Festival’s Inside Islam series. David Assmann is also scheduled to attend the screening. Other films in the series include The Song of Sparrows by the Iranian director Majid Majidi. I look forward to viewing both later this week.

Even if you haven’t seen the film Football Under Cover and do not live in Wisconsin, we’d like to hear your thoughts about Muslim women in sports around the world. Do you think Muslim women playing soccer is a sign of progress? Have you heard of the International Women’s Islamic Games in Tehran and/or attended them? If so, what was your experience like? Please leave your thoughts and answers to the questions above in a comment below or send us an email. We look forward to reading them.

Update (4/1/09): A recorded version of the radio program “Football Under Cover” is avalible in the Inside Islam radio series archive or you can click here to download a mp3 file.

2 thoughts on “Muslim Women and Soccer in “Football Under Cover””