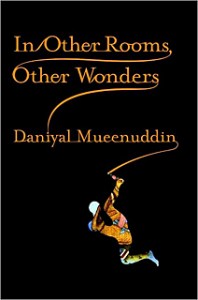 In Other Rooms, Other Wonders (Cover via Powell's Books)

It’s no wonder that Danyal Mueenuddin’s extraordinary collection of linked stories, In Other Rooms, Other Wonders, is creating a buzz all the way from People Magazine to The Economist. The truth is that I can’t wait to go home and read another chapter, and it’s not often that I get to say that. In the first chapter we meet Nawab, the crafty electrician, who uses the challenge of having sired twelve daughters for whom he must provide dowries as a goad to stretch his resilience, resourcefulness, and sleight of hand. In the second chapter we meet Saleema, a maid who resolutely sleeps her way up until she falls for a fatal form of true love in the arms of an aging valet.

END_OF_DOCUMENT_TOKEN_TO_BE_REPLACED

Honeymoon in Tehran (via Random House)

Author of Honeymoon in Tehran and Time magazine reporter Azadeh Moaveni will tell her tale of love and anguish in the Islamic Republic Thursday, February 26, 2009, on Here on Earth: Radio Without Borders. The show will air live at 3:00 pm CST and re-broadcast at 9:00 pm. To find out how to listen, or download the show after it airs, click here.

Is there a question or comment you would like to hear read live on the air. Leave it here, on this post, or send us an email! “Honeymoon in Tehran” will also be included as a related radio program in the Inside Islam radio series. Click here to subscribe to the podcast on iTunes, and listen to past shows.

This Thursday, the US Senate Committee on Foreign Relations will hold a hearing on “engaging with Muslim communities around the world.” The hearing is part of a series led by Senator John Kerry on improving relations between the US and the Muslim world, and will include testimonies from well-known Muslim Americans.

END_OF_DOCUMENT_TOKEN_TO_BE_REPLACED 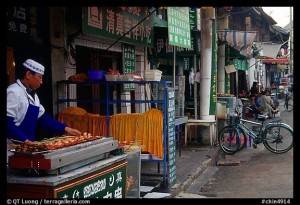 Muslim Cook in Yunan (via Islam in China)

Earlier this month, Islam in China was introduced to the blogosphere as a way to learn about all things Muslim and Islamic in Chinese culture. Points of interest are the journal of an American Muslim in China, as well as the upcoming interviews with Chinese Americans. The site was born out of a popular blog, started in 2007, under the same name.

Are their similar sites that clear up misconceptions about Muslim communities in other countries? Will you point them out here on Inside Islam? Please leave a link in the comments section or send us an email about the site.

We are reposting an article excerpt with permission from MuslimMatters: “Muslim Scholars–West’s Natural Allies in Fighting Scourge of Terrorists” by Tawfique Chowdhury, the director-general of Mercy Mission and AlKauthar Institute. The full post is here on MuslimMatters, with interesting past conversations on this topic in the comments section. Please leave a comment here in the post below if you wish to continue this conversation here on Inside Islam.

Ladies and Gentlemen, hundreds of years before the anti-terrorism policies of the West, approximately 1400 years ago, Muslims were fighting the intellectual battles that terrorism presented in the battle between the Khawarij of the past and companions of the Prophet.

This continued throughout the ages – where independent Muslim scholars presented the best defense against distorted terrorist ideologies. Today, this is also seen in the manner in which Saudi Arabia has tackled their terrorism problems by putting independent credible Muslim scholars at the forefront in the intellectual battle for disproving terrorism. By equating these Muslim scholars representing orthodox Islam with religious extremism, the war on terror will lose its greatest ally in this long drawn saga.

END_OF_DOCUMENT_TOKEN_TO_BE_REPLACED

Today Here on Earth: Radio Without Borders will air the next program in our Inside Islam Radio Series “Love and Dating in the Muslim World: True Stories of Falling in Love.” The show airs live at 3:00 pm CST today and is re-broadcast at 9:00 pm. To find out how to listen, click here to visit the radio show page for this program. Also on the page, you will find bios for our guests and full audio for the pre-recorded interviews with local Muslims on their stories of love, dating, and marriage.

The topics range from dating in Turkey, hiding relationships from parents, eight-year courtships, the engagement contract, an impromptu proposal in a roadside ditch, modernizing traditions and working wives who are separated from their husbands in school, and even the story of a Catholic convert marrying a Somali woman. All of these are available for you to listen here on Inside Islam: Dialogue and Debates. What is your marriage or dating story and will you share it with us? Please leave a comment below or send us an email with your response.

The next radio show for Inside Islam: Dialogues and Debates is “Love and Dating in the Muslim World: True Stories of Finding Love.” Click here for info on the show and related topics. The show airs live on February 18, 2009. Yesterday, Here on Earth: Radio Without Borders aired a related show which we describe below.

END_OF_DOCUMENT_TOKEN_TO_BE_REPLACED

President Barack Obama has announced the expansion of aid to faith-based partnerships. His executive order built upon President Bush’s White House Office of Faith-Based and Community Partnerships initiative, slightly changing the name to the White House Office of Faith-Based and Neighborhood Partnerships. As has been much discussed, government support of faith-based initiatives calls into question the separation of church and state. The worry is that federal funds may go to businesses whose hiring or service provision discriminates against people with different religious beliefs. At The National Prayer Breakfast this month, President Obama announced the office and called for religious leaders to let go of intolerant attitudes. He asked America to return to pluralism:

the particular faith that motivates each of us can promote a greater good for all of us. Instead of driving us apart, our varied beliefs can bring us together to feed the hungry and comfort the afflicted; to make peace where there is strife and rebuild what has broken; to lift up those who have fallen on hard times. This is not only our call as people of faith, but our duty as citizens of America, and it will be the purpose of the White House Office of Faith-Based and Neighborhood Partnerships that I’m announcing later today.

President Obama promises the White House office aid will extend outreach to organizations based on the impact of their work, not the influence of faith-based institutions. He also ruled out proselytizing and laid down the first practical outcome of launching outreach is to to improve services that reduce poverty. In addition, the president has adopted a pluralistic vision for reaching out to the Muslim community in the Arab world. He hopes to open a dialogue with Islamic leaders around the world and believes it can happen soon.

END_OF_DOCUMENT_TOKEN_TO_BE_REPLACED

Author Alaa al-Aswany wrote an op-ed about President Obama’s silence about the Gaza conflict in “Why the Muslim World Can’t Hear Obama,” published in The New York Times. He contends that President Obama’s rhetorical gesture to reach out to the Muslim world in his inaugural address and in an interview with Arab news station Al Arabiya wasn’t taken seriously by Egyptians because he has yet to break his silence on the conflict and his steadfast support of Israel.

Mr. Obama’s interview with Al Arabiya on Jan. 27 was an event that was widely portrayed in the Western news media as an olive branch to the Muslim world. But while most of my Egyptian friends knew about the interview, by then they were so frustrated by Mr. Obama’s silence that they weren’t particularly interested in watching it. I didn’t see it myself, but I went back and read the transcript. Again, his elegant words did not challenge America’s support of Israel, right or wrong, or its alliances with Arab dictators in the interest of pragmatism.

Do promises to reach out to the Muslim world matter if no one can hear them outside the US? Would actions speak louder than words? If so, what would a guesture of peace look like in the eyes of the Muslim world? We welcome other opinions below, please leave a comment if you have something to add to the dialogue.