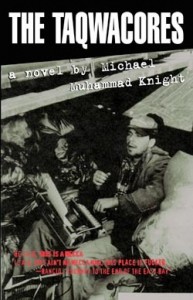 The Taqwacores, a novel about the Muslim punk scene.

A group of Muslim-American youth play punk music and live together in The Taqwacores, by Michael Muhammad Knight. The book has inspired Muslim youth to rethink their faith in terms of their individual experiences, much as the author himself did. According to Guardian UK reporter Brian Whitaker in “Punk Muslims,”  Knight wrote The Taqwacores at the age of 19, after converting to Islam and studying in Pakistan for a year. When he returned to America, he started writing in a local mosque and even stayed through the night so he could be there alone. When the novel was complete, he made xerox copies and sold them out of the trunk of a car. The book caught on and created a community and popular following in the US.

Real-life taqwacores are Muslim-American young adults that have decided to build a community that fits with their own experiences, values, and taste in music. They live a punk lifestyle and follow their own rules whether or not they are considered halal, or permissible, in Islam. For the most part, these punks are angry with the shortcomings of their parents’ values and mainstream American culture. The music is part of a larger struggle to make sense of the inner conflict and discrimination young adults face as both Muslim and American since the 9/11 attacks.

The punk scene in America has obviously been around for decades. Movies like SLC Punk! tell the story of young adults growing up in the 1980s and rebelling against the hippie movement that defined the values of their parents’ generation. Matthew Lillard plays a punk in Salt Lake City, a city known as the headquarters Mormon Church. In one scene, he criticizes his parents for their decision to move from New York City, which he calls the “Mecca” of culture, settle in conservative SLC and ultimately change nothing. Similarly, the second-generation Muslim punks criticize practices and values of their immigrant parents, who moved to America for freedom of religion and opportunity but ended up living in conservative Muslim neighborhoods. Punks, like the group living together in Taqwacores, want to let go of restrictive beliefs and create a new community.

Muslim punk bands have become more popular since the days Knight sold copies of his novel in the mosque parking lot. The Kaminas, a band created by fans of Knight’s book, even went on tour throughout North America last year. The band apparently snuck on stage at the ISNA annual convention to perform their music. The organizers were not happy and eventually asked them to leave, but the audience insisted the band stay for one more song. Director Omar Majeed followed them on tour and recorded the group of punk rockers for a documentary scheduled for release later this year.

You can watch rough footage of the Muslim punk prank on the website for The Taqwacores documentary by Omar Majeed. Another film based on the novel by Eyad Zahra is also planned for release in 2009. Do you have any other examples to add? Have you had any interactions with Punk Islam? Do they change your opinion about Islam in general? Leave a comment or send us an email.

4 thoughts on “The Taqwacores and Punk Islam”