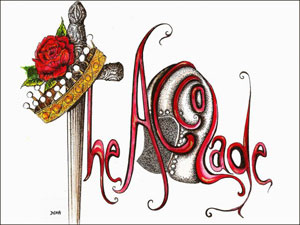 The Accolade, a rock group from Saudi Arabia

The Accolade, an all-female Saudi rock band has received big-time media attention, including an interview with NPR and a feature in The New York Times. Despite the fact that the band cannot play in public because of their gender, Dina, Dareen, Lamia, and Amjad have developed a large virtual following on Facebook and MySpace.

As we try to demonstrate on a regular basis here on Inside Islam, Muslims around the world interpret Islamic practices and tenets in diverse ways according to the context of their daily lives and culture. In Saudi Arabia, the traditional interpretation is very conservative and has become notorious in many other countries for its perceived oppressive treatment of women.

With this frame in mind, it’s not surprising to find out that the women of The Accolade cannot perform in public and must refrain from posting any photos of themselves online. The band has to play in hidden locations and their music is recorded in private compounds. Even Saudi men, The New York Times says, who play rock music are censored. Informal concerts in the streets are also monitored by the religious police.

As Muslimah Media Watch points out in “Rock On: Saudi Arabia’s All-Girl Rock Band,” rock music and the rebellious image of young Saudi Women are not exactly new. What is new is the simple fact that a rock band from Saudi Arabia, uploading their music independently onto social networking sites, was picked up in mainstream media reports at all. This represents a change in mainstream coverage and speaks to the power of new media to spread new ideas and music — as well as a nuanced view of Islam — across the globe.

Mainstream media institutions have a hard time covering all the possible stories from around the world, especially within their time constraints. New media, such as blogs and social networks, as well as other tools on the web, like Google blog search, make this kind of coverage even more time consuming. There is a lot of new media “noise,” making the investigation of sources tricky. That is, with increased public access to media comes both the positive gain of diversity as well as the less practical increase in material, some reliable, some not.

However, new media sources can be incorporated in mainstream coverage of any global issue, and often bring diverse perspectives and added depth. This is especially true for the under-covered area of Islam-related news, where mainstream stories are often limited to the breaking headlines of the day and miss the multiplicity of different interpretations and varieties of stories available. Now that there are Muslim bloggers creating networks on the web, the sources are available and they are vocal about both under-covered issues and about alternative interpretations of mainstream issues.

The Accolade relies on one component of new media, social networks, to spread their voice. However, the band represents the myriad ways the Muslim community is using the web to challenge stereotypes and create public discussion about politics, women’s rights, and other social issues.

The problem with mainstream reports about The Accolade is that they frequently settle on grand statements about Saudi women in today’s society. Instead, filtering through the information on the web helps present a more nuanced look at emerging issues in the Islamic community worldwide. Making sweeping generalizations about Saudi women while writing about the women of The Accolade allows for the conclusion that they are still terribly oppressed because they aren’t addressing past women’s rights abuses or censorship. In fact, the opposite might be true: they may be making progress in diverse ways. Neither new or traditional media can speak for them or predict the future but it would benefit mainstream coverage to be informed of the public discussions on these issues in the Muslim community.

The Accolade makes no mention of human rights or religious issues in their interviews with mainstream media. Guitarist Dina hints that activism is not even their aim. In the band’s interview with NPR, she says:

We don’t want [to] make big deal of something. We just want to play music. Play something we love only. And we don’t look for more.

A better approach is to let The Accolade and their music speak for themselves and to keep participating in the discussions from new media in the Muslim community. The Accolade tells its own story and the members represent a new way of viewing Saudi women specifically and the Muslim world more generally. The image they put forwards opens up readers and listeners to the diversity of the Muslim world by challenging stereotypes about oppressed women and mainstream misconceptions about Islamic extremism.

The Accolade is a current and exemplary instance of how bloggers and users of Facebook and other social media are advancing positive, social goals in a non-violent way. Their music successfully made mainstream news and generated social and political commentary published by prominent voices in the Muslim community.

Mainstream media coverage about The Accolade alludes to the same question that the Muslim community is discussing in public through new media: Can internet activism create real-life change? Women’s rights and online activism are additional topics that could be more prominent in the mainstream coverage about Islam-related issues. Reports on whether social networks and other new media tools have the power to create real social change for women’s issues are fascinating angles to critique today’s global society and explore the Muslim world.

What’s clear is that, at least for The Accolade, the music is meant to speak for itself. Enjoy the music and art of The Accolade, a female rock band from Saudi Arabia using new media to share their voices with the world. Below is a list of links for more information about the band and related topics. If you have anything to add to the conversation, send it along or leave a comment at the end of this post.

3 thoughts on “The Accolade: An All-Female Saudi Rock Band”