At first, we cast about looking for Muslim legal scholars and we found a great one in Asifa Quraishi right here in the UW Law School. But then it became obvious that what the program needed in order to come alive was stories. That wasn’t so easy. What we heard from Muslim women’s organizations that track such cases is that the women are reluctant to talk.

Then, out of Somalia, came the story of the 13 year old girl who was stoned to death by the Islamists currently in power just because she reported that she’d been raped. After that, we heard from our old friend Amna Buttar, a UW physician who founded a women’s rights organization that brought Mukhtar Mai to Madison and was subsequently invited by the late Benazir Bhutto to join her cabinet. 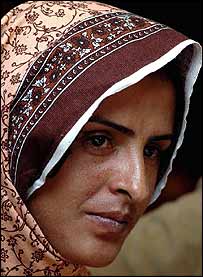 Amna’s human rights organization in Pakistan is now fighting the appointment of two cabinet ministers who have been accused of involvement in horrendous crimes against women that are contrary to Islamic Law: in one case, the torture/murder of three girls and two of their supporters who were buried alive for protesting their arranged marriages; in a second case, the giving of five little girls to an enemy clan as booty in settling a feud. Stunning.

Asifa will have her work cut out for her in unpacking all these cases which are obviously influenced by tribal practices. Meanwhile, we’ve uncovered a whole host of Muslim women’s rights organizations in places like London, Nigeria, and Malaysia fighting hard for a more equitable interpretation of the law, especially as it concerns divorce and child custody.

Just this week we contacted a women’s organization in Malaysia that’s fighting for the right to practice their yoga poses. Apparently, the practice of yoga has just been outlawed as blasphemous! Of course, we have to bear in mind that there are fundamentalist Christian sects right here at home that are equally suspicious of anything that ends with Namaste.

Who Speaks for Muslim Women?

What’s emerging is an entire spectrum of Sharia law as it pertains to women, from brutal to moderate to helpful to progressive. We’ve obviously just scratched the surface and we’d love to hear more stories from you. Can you tell us about any women who’ve been helped in sharia courts? Do you know of any strategies, especially those initiated by Muslims themselves – men or women – that can help end the barbaric tribal practices associated with Muslim societies that deeply violate the cherished tenets of international law? Do you feel outraged when you hear of honor killings, stonings, and the like? Enough to do something about it?