The blog Hatshepsut is about women, politics, and academia in Egypt. History knows Hatshepsut as an ancient Egyptian pharaoh. Her reign receives less attention than others like Cleopatra because she maintained a stable, peaceful, and prosperous legacy without the dramatic baggage. 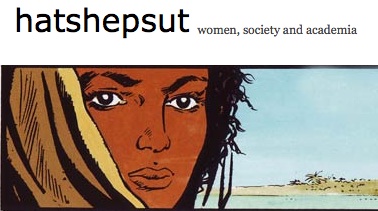 Hatshepsut’s historical image is central to both the substance and the form of the blog that uses her name. Blogger Eman Shaban Morsi makes clear, though, that content “will not be stuck with nostalgic discussions of women” but will also discuss current issues of interest to Egyptian and other Arab readers.

The blog has many interesting posts. This entry is on an Arabic magazine for women with the title “Undoing the Hair Plaits,” a braided hairstyle that reflects repressive social norms. The symbolic undoing is an act of rebellion, offering a counterpoint to the stories in the mainstream media coverage about Egyptian politics. Protests and labor strikes are discussed by journalists in international media and organized on Facebook. Like the Hatshepsut of history, though, these subtleties of culture receive less attention in the news and daily conversation.

To make any broader conclusions about Muslim women from the five entries under the religion category would be to betray the spirit of Hatshepsut’s historical image as “the most distinguished of women.” Moreover, to make a categorical statement about the reality of Egyptian politics based solely on virtual media sources would be a dramatic stretch of the imagination. However, these entries and others like them serve a vital role in illustrating the multitude of different stories and lives of Muslim women and how those are affected by broader societal issues.

What attracted my attention most is the series “Overheard in Cairo.” Like Overheard in New York City it features short clips of dialogue submitted by attentive listeners eavesdropping for the sake of everyone.

Reading the latest post’s title, “Relocating to NYC,” makes me wonder what will be overheard in the city’s global community. Hopefully, Hatshepsut’s image of rebellion will enlighten and make sense of all the dramatic debates about sexism, religion, and the Arab world during the US Presidential Elections. President-Elect Obama is still dealing with some of that baggage. Maybe the “Overheard in” concept can be a useful tool from digital culture that defies the political baggage and mainstream narratives and uses virtual reality to create more informed discussions.

Hatshepsut is published by researcher and freelance journalist Eman Shaban Morsi who taught in the English Department at Cairo University before moving to NYC.

One thought on “Overheard in Cairo”