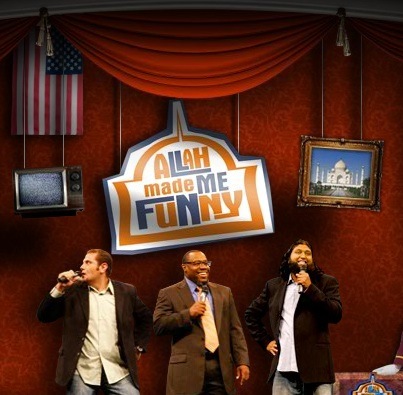 Last week the three comedians joined NPR’s Tell Me More to talk about the film and their experiences as Muslims in America. The point of Allah Made Me Funny is to give people a perspective of Muslims apart from what they see in the mainstream media. In the interview, Mo Amer says the most important thing about the movie is that people learn about each other. The problem is that:

There’s this huge gap and all they get their knowledge from is media that just keeps portraying us as terrorists or as evil people. When in fact most of us are doctors here in the United States helping one another as part of society. That’s the problem.

The notion that a complete picture of Islam is not being painted by the mainstream media is behind our Inside Islam project. Join us for our second radio show on October 29, 2008 as we open up discussion about young Muslims in the media. You can comment about the show or “Allah Made Me Funny” here on this post. Also, watch clips from the group’s comedy tour and the movie trailer below. What Muslim stereotypes do you see in the media that aren’t being addressed? Ask Reza Aslan here about Muslim stereotypes in the media before we interview him as a guest on the upcoming show.